It was a sunny Diyarbakir day. I was walking through the old city of Suriçi. It was announced that Dört Ayaklı Minare (the Four-Legged Minaret) had just been opened after two-and-a-half years. It was forbidden to go to the minaret since Dec. 2 2015, after the head of the Bar Association and our friend Tahir Elçi was assassinated there.

I knew it would be hard for me to visit the minaret after two years, but I went. The minaret has been covered with Turkish flags. It didn’t feel like our Minaret any more. I stood in front of its legs. The last time I was there was on Dec. 1 2015. I stood there crying as cats were trying to lap up Tahir’s dried blood. I guarded the area for a few hours until they announced the curfew.

The minaret and its mosque were open, but just behind the minaret the barricades of the curfew began. The curfew still continues in six districts of Suriçi. I couldn’t go to the Armenian Church; Saint Giragos Armenian Church, like many other historical sites in the area under curfew, has been looted. For more than two-and-a-half years, residents have not been able to enter the area, only security forces. Then, who is looting these historical sites?

There are lots of stories in the city. People believe that in the curfew area many valuable historical items and jewellery were found and sold. I went to the Gold Market to visit one of the shop owners I have known for a long time. He confirmed that a lot of historical jewellery from the area had come onto the Gold Market to be sold. He said people with close relations to the security forces had brought the items to the market. 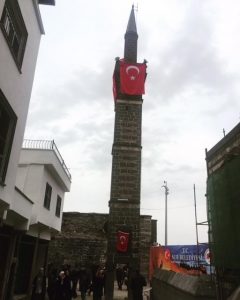 I continued my walk to Alipaşa, one of the oldest districts of the city, seized in the name of urban renewal. The 1,000-year-old district was totally demolished. There were a few tents near the demolished area. These belonged to families whose houses were destroyed and had no place to go. I saw many historical items like fountains, doors and old stones displayed in the narrow streets just behind the demolished area. These were the historical items belonging to the old houses that were demolished by the state. I asked a woman who was sweeping the street: “Whose goods are these?” “They are the goods belonging to the old houses” she answered. “Why are they here?” I asked. “They are for sale” she said. History is for sale, I thought. With a 7,000 year-old history, Suriçi is not just the homeland of Kurds, but also of Armenians, Chaldeans, and Assyrians. All our histories are for sale!

I remember my grandmother, my nene, who passed away in 2014 at the age of 104. She witnessed the Armenian genocide. I remember her singing ballads for her Armenian neighbours. When she sang, it was as if she was living through the events again. A hundred years ago, Armenians and Kurds had lived together in our village Sheik Selamet, in the district of Dicle, Diyarbakır. During the genocide, soldiers stormed the village, gathered the Armenians, and led them to their deaths. The soldiers took our neighbours one by one. My nene was just a little girl, standing next to her uncle, when his Armenian neighbour asked her uncle “Why are you letting them take us?” He answered: “They are the state, what can we do?” The Armenian neighbour responded: “Armenians and Kurds are like needle and thread. The thread always follows the needle.” While recounting this memory, she repeated: “The thread always follows the needle.”

A hundred years after the genocide, Armenians are still “bastards” in the eyes of the Turkish state. The hatred of Armenian and Kurdish come together as we are both seen bastards of the state.

Yes, my nene, the thread has followed the needle. It is time to cut the thread and to change this fate! It is not too late!