Akın Birdal is perhaps Turkey’s most famous human rights campaigner. Co-founder of the groundbreaking Human Rights Association (IHD) in 1986, he served as its head from 1992 until he was shot by far-right nationalists at the association’s headquarters. Birdal survived the assassination attempt and went on to become a member of parliament from 2007 until 2011.

Birdal spoke to Ahval about his life and work.

Q: You worked as an agricultural engineer and chairman of farmers co-operative Köy-Koop for years before working as a human rights advocate, how did you make the switch?

A: Yes, I am an agricultural engineer by profession. I was working for the agrarian engineers’ union for seven years. Later I resigned from the public sector and started working at Köy-Koop, a farmers’ co-op.

After the 1980 military coup, I was arrested with eight of my co-workers from Köy-Koop. We were acquitted about a year after being jailed. Then I opened a grocery store with four of my friends, we called it The Dost (Friend) Farm, a tiny place about 20 square metres. A lot of things started there.

Quite a few intellectuals, politicians and writers came to the opening of our grocery store. The 1980 military coup had effectively turned Turkey into a torture camp; 650,000 people were tortured by the military regime. The relatives, parents, and spouses of these prisoners were trying to figure out what to do, and that’s how the idea of a Human Rights Association (IHD) emerged. On July 17, 1986, we inaugurated the association with 98 members.

Q: You were elected president of IHD for three terms from 1992. During that time there was news about burned villages in the southeast of Turkey. You visited that region quite a few times during that period and witnessed many human rights violations. Are there any violations that have stuck with you all this time?

A: The Güçlükonak massacre is definitely one that I find hard to forget. Eleven villagers were killed on January 15, 1996. The villagers were shot in a van, and then they were burned. They said that the PKK was responsible for the attack.

We visited Güçlükonak on February 12. A week prior my wife told me she had some pain, she had some tests done, but couldn’t get a diagnosis. Then I called a physician friend, we made an appointment for February 14. But we, as the IHD, had organised an event for that day and we had invited the Turkish intellectuals and journalists to join us. I couldn’t be with my wife on that doctor’s appointment. We went to Güçlükonak and reported our findings.

I called my wife’s doctor afterwards. He said, ‘you need to be here as soon as you can’. My wife passed away two months later. Trying to report human rights abuses, advocates rarely have time for themselves, their problems, and their sufferings.

I lost my wife in April 1996 and in August 1996 we went to the mountains to return eight Turkish soldiers held captive by the PKK, only four months after my wife passed away. 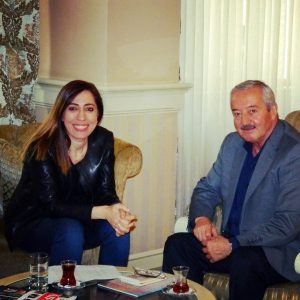 Q: The PKK is holding some Turkish soldiers captive today as well. Why aren’t there any negotiations for their release similar to what you did in 1996?

In the late 90s our colleagues from the region, our branch presidents could at least make appointments with officials from the Ministry of Interior. They weren’t helpful, but they were at least willing to listen.

In 1992, Prime Minister Süleyman Demirel promised a peaceful Newroz festival. Next day in Cizre people, including women and children, started gathering to celebrate the festival. Within an hour, soldiers with machine guns appeared on the rooftops. We immediately contacted three government officials. The mayor said, ‘this is Ankara’s order’. The soldiers started shooting while we were leaving the mayor’s office. We could barely make it to the hospital, to report the situation.

A: This is the exact same policy since the time of the Ottoman Empire. This is a state that has been empowered by its geostrategic position and has not worried about establishing peace for its people, or even investing in development or progress in society to raise its people’s happiness.

I mean there is a lack of democracy. There is a lack of intellectuals. It was somewhat different before the 1980s. Despite having a fascistic state, there were working class and civil society organisations.

Another difference between those days and today is the Soviet presence in the cold war period was significant regarding the world’s balance.

Now no state is the friend of the people or the defender of justice. Look, Turkey is currently on trial in Europe. But international communities such as the United Nations and the European Union must also be tried. The European Parliament called on Turkey to withdraw from Afrin. But the Turkish government didn’t even care. Why? Because two days before this call they released 3 billion euros to Turkey. They continue selling arms to Turkey. Then they say, ‘Get out of Afrin’. Whose weapons are used in Afrin? There will be no peace unless the world puts an end to this hypocrisy.

Q: There is a feeling of despair in Diyarbakir. The incursion into Afrin for the last two months is further amplifying that feeling. The Kurds are dying. There are also quite a few young people here from Afrin. On the other hand, more than 6,000 members of the pro-Kurdish political party HDP are in jail, many deputies have lost their parliamentary seats, some are in prison. How can we overcome this desperate situation?

But a well-known expert on the Middle East said that Turkey … is now at a point of no return.

Q: Some experts claim that Turkey might find itself somewhere between Iran and Afghanistan in the next 15 to 20 years. Do you agree? Do you think that Turkey is now at a point of no return?

A: Turkey did make a rash and dangerous lane change. The West as well has moved away from its own democratic values. But they will re-establish those values eventually. The issue of refugees, the global economic crisis and similar restructuring movements took them by surprise. But Turkey is rapidly moving away from Western values. They positioned Turkey towards the Middle East and tried to become the leader of the Middle East. But they couldn’t succeed. There is a grinding war of sovereignty in the Middle East today. Qatar is playing for the lead as well. I think Turkey might be at a point of no return.

Q: You survived an assassination attempt in 1998. But even when you’re talking about that horrible experience, you have a smile on your face. Where do you get this strength, energy, this love of life? What is it like to be Akın Birdal?

A: Thank you. It is due to my belief in peace, friendship, and humanity. Human rights advocates are like that, they’re peaceful. They work for love and peace, and they work against hatred and conflict.

At that time, when I was attacked, we were chastised by the government. Some of the people who were targeted on those days lost their lives, and some others like the Altan brothers, like Ilıcak, are in prison today.