While scrolling through social media a few days ago, I almost missed news about a family I know. Their daughter Hacer Aslan was burnt alive while sheltering in a basement during the military operations in the southeastern mainly Kurdish city of Cizre in January 2016. Her mother is still looking for Hacer’s body and believes it is under the new state housing blocks. And she asks “Isn’t this torture?”

On Feb. 11, just after the Minister of Interior Efkan Ala declared operations were complete, special operations team’s posted photos on their social media accounts of dead bodies lying on the ground in Cizre. In the photos, women’s dead bodies were displayed naked.

After the military curfew was lifted, I visited Cizre many times. In September 2016, I visited Hacer Aslan’s family. There were eight children in the family. Two of the children, Sait (23) and Hacer (18) were killed in the Cizre basements. One of the children Muhammed went to the mountains when he was only 13. No one knows if Muhammed is alive or not. Their uncle, Selim, a father of three, died in his home when he was hit by a piece of shrapnel during the military curfew.

I spoke with their mother, Hezni Aslan. She told me that Sait was a fighter. “He was imprisoned because of participating in a press meeting and he was tortured in prison. When the clashes began in Cizre, he participated with YPS. One day he called me and said ‘Mum I will not return home any more, I will fight to protect our street’. This was my last conversation with him.” 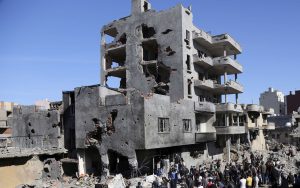 Hacer could not find her brother in the basements. Sait had left the basement before she came. While leaving Cizre, Sait heard that Hacer had come to the basements to find him and he decided to return. He was captured by the special operations team and was killed. Hacer was burnt alive in the basements.

While telling me the story of her children, Hezni sometimes smiled when remembering their childhood, sometimes she became very quiet. For months, she looked for her children’s dead bodies. “I never thought that Sait would die, but I knew that Hacer would die. After many months they called me from the morgue in Gaziantep. I went. They said they had found the dead body of my child. I thought it was Hacer. But when I opened the white cloth, I saw that it was Sait. Months and years are passing; I still haven’t received a piece of Hacer’s hair. I am looking for a piece of my daughter’s hair”.

Two-and-a-half years have passed since the operations in Cizre, 18 bodies have still not been found. Some unidentified bodies were buried in the Cizre Children’s Cemetery. On the gravestones, there are only numbers.

Yesterday, I was in the curfew area of Sur, in my hometown. The curfew has continued for more than two-and-a-half years. It was raining heavily. There were police barricades in front of the curfew area. I knew it was forbidden, but I removed the barrier and entered the area. I saw a school and Hasırlı Mosque that was destroyed during the clashes. I quickly walked towards them. A family from Erzurum, the Arslan family called me last month and told me that their son, Hakan Arslan (17), was buried somewhere there. The family has applied to the Diyarbakır Governorship and Police Administration multiple times to enter the curfew area to retrieve their son’s body. They have not given permission. I walked quickly to the area and tried to find any sign to show that someone was buried there. Then I began to cry, what am I doing?!

In the last three years I have continuously written about human rights violations and war crimes in my region. I have tried to increase public awareness about the ongoing war and the destruction in my hometown. Like most Kurds I feel so tired and hopeless.

Every day we wake up to more bad news, it never ends.

It has not been a year or two, it has been nearly 40 years of war and death in this region.

A part of me feels that I should continue to write and record this history even though I know it does not change anything. But when I think of the numbered graves in the Cizre Children’s Cemetery, I wonder what is the point of writing.