Turkey’s Supreme Election Council (YSK) announced last week that in some Kurdish cities ballot boxes for the June 24 presidential and parliamentary elections would be relocated, a move that will favour President Recep Tayyip Erdoğan’s ruling party and undermine the vote for the pro-Kurdish opposition.

For Erdoğan it is imperative to win the polls, as afterwards Turkey will take on a new presidential system of government, the office of prime minister will be abolished and parliament will lose much of its powers of oversight.

The votes of Turkey’s sizeable Kurdish minority could be decisive because if the main pro-Kurdish party fails to win more than the 10-percent of the national vote needed to enter parliament, most of the seats in the mainly Kurdish southeast will go instead to Erdoğan’s party, which traditionally comes second in the troubled region.

As a result of the YSK decision to move ballot boxes to what it says are more secure locations, some 170,000 voters will now have to travel to polling stations further afield to cast their votes. That suggests the hundreds of towns and cities losing poling stations are unsafe, yet many of the events used to justify the relocations took place in the 1990s.

A closer examination of the places from where the ballots boxes are to be removed however reveals them to be in areas where the pro-Kurdish opposition Peoples’ Democratic Party (HDP) scored highly in previous elections.

For example, 143 ballot boxes designated for 6,706 voters are to be moved out of the southeastern city of Mardin where the HDP won 73 percent of the vote in the June 2015 parliamentary elections, the pro-Kurdish ANF news agency said.

Yadişen Karabulak, HDP co-chair for the city of Van, said 224 ballot boxes in Van would be relocated, affecting 50,000 voters. Some ballot boxes are being moved a considerable distance; 27 ballot boxes in the district of Gülpınar will be moved 40 km further away. In the last elections, the HDP won 85% of the vote at these polling stations.

In the districts of Hani, Kulp, and Lice in Diyarbakir province – all losing their ballot boxes – the HDP won more than 90 percent of the vote.

In many cases, ballot boxes will be moved to places that voted strongly in favour of Erdoğan’s Justice and Development Party (AKP). For example, within the city of Muş, ballot boxes were moved from the district of Suluca, with 252 voters who voted 94 percent in favour of the HDP in the last elections, to the district of Arpayazı, where the AKP won 75 percent of the vote. Nineteen cities in which the HDP came first or second in the polls have had their ballot boxes relocated.

The HDP’s vulnerability to Turkey’s uniquely high 10-percent electoral threshold and Erdoğan’s potential gain from any HDP loss elevates the importance of securing the vote, and requires the opposition to work diligently to address concerns over ballot boxes. 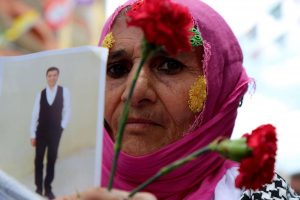 The ability to cast votes freely in the southeast is an ongoing problem. Since the 1990s, security forces and pro-government Kurdish militias have pressured voters by standing guard over polling stations, especially in rural areas. Having worked in rural areas for many years, I have personally witnessed security forces pressuring civilians into producing certain electoral results. Combined with these pressures, the relocation of ballot boxes in the region will severely compromise the security of votes in rural areas.

The HDP has announced measures to address the relocation of ballot boxes. During a visit to Diyarbakır, HDP co-chair Sezai Temelli said thousands of officials had been tasked with addressing the relocations and security of the ballots. HDP sources reported they were arranging for vehicles to transport villagers to the new voting sites.

It will require some 3,000 buses to transport 170,000 voters. This is not a burden the HDP can bear on its own. Other opposition parties, including the main opposition Republican People’s Party (CHP), must support these efforts. Organisations such as the Human Rights Association have joined forces in Diyarbakır to ensure free and fair elections, taking steps to mobilise lawyers and train observers.

Nevertheless, it is important to remember the strength of the rival party, which has control of the security forces and city utilities. Every individual must bear the responsibility of overcoming the inequality of these conditions, and it is incumbent upon everyone to make sure voters can reach the ballot boxes. The opposition has work to do as well. Safeguarding the HDP vote and ensuring it can pass the electoral threshold will determine the future of Turkey.

Let me take a moment to address the EU nations and election watchdog organisations that will send observers to Turkey. These elections will dictate Turkey’s fate. To the extent that you are able, increase the number of observers, and send your officials to Kurdish cities and rural areas. The safety of the region’s ballots is at serious risk.