The trauma stemming from state terror is still alive in the minds of those living in Turkey’s southeast, a region predominantly populated by Kurdish people.

In July 2015, a two-and-a-half-year ceasefire between the Turkish state and the Kurdistan Workers’ Party (PKK) armed militant group broke down, leading to clashes in urban areas. Civilians were caught in the middle.

One of these civilians was 12-year-old Helin Şen, who was gunned down nearly three years ago on October 12, 2015 during one of the first all-day curfews in Sur, the historic centre of Diyarbakır, the biggest city in the southeast. The curfew was introduced to help clear the Kurdish militants and to restore public order. During the curfews, residents were unable to leave their homes, and reporters were unable to document the fighting.

Nazmiye Şen, Helin’s mother, described what happened that day, what the family has experienced since, and the ongoing investigation.

Nazmiye spoke about the days before Helin was shot in Sur.

“It was a three-day curfew. The curfew began on Saturday, and we had no electricity, the water was cut off, and there was no food at home. We were in a tough situation. On Sunday, I tried to go out with my children and my husband’s disabled uncle. We wanted to get out of Sur.”

But, Nazmiye said, they were not able to get very far before they encountered a Cobra police armoured vehicle. The police swore at them and were forced to return home.

“There was no food at home. Our neighbour gave us a half loaf of bread, and it had already started to go mouldy. We had to eat. I made pasta on Sunday without bread or tomatoes. We hadn’t made preparations for the curfew. We didn’t know it was going to happen.”

She received word on Monday morning that a bakery was open and that people were selling fruit from the courtyards of their homes.

“I went to one of those houses nearby and bought tomatoes, apples, and oranges that day. I gave what I bought to my daughter, and she took everything home. Then, we were going to buy bread when a Cobra across from us fired three shots. The three hit my daughter. We were all there together – my eldest, neighbours, and the children of my brother-in-law. There had been no clash there of any kind. There were only people, women, and children. There wasn’t a single teenager among us. We were going to buy bread. My daughter was lying in blood.”

Nazmiye said she was ushered into a nearby apartment and had to wait a couple of hours before she was given permission by the prosecutor’s office to leave.

“Then I saw that my daughter’s brains on the stones in Sur. Another thing that I remember very clearly is that about 30 police officers were standing where my daughter was killed. The looked like ISIS. And something is just now occurring to me. They were probably there to get rid of evidence. One of the bullets was never found. They probably were there to make it go away.” 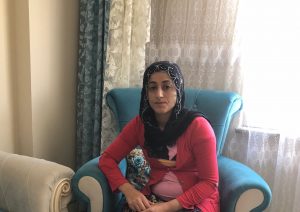 The Şen family has pursued an investigation and lawsuit since Helin’s death. Nazmiye said the state had more than enough evidence to bring the case to trial, but the investigation had been stalled.

“It’s obvious who killed my daughter. It’s also in the state records. Shots were fired from the Number 11 Cobra. The gunman knowingly and intentionally opened fire, because there were only women and children there. There was only 100 metres between us, and he saw us. The women there were harassed and beaten up. We experienced all that without there being any conflict. The investigation file said there was no clash.

“Those who haven’t experienced this say that the police would never do something like this. But they did. We were there and saw the brutality.”

The Diyarbakır branch of the Human Rights Association has supported the family. Abdullah Zeydan, its president, said the state was protecting the police.

“After Helin’s death, an investigation was launched, but a confidentiality order was granted which is still ongoing. We objected to this several times but were overruled. The prosecution is intentionally making the evidence invalid by dragging out the case and spreading it out over time in order to exonerate and protect the police. There’s no legal explanation for this,” he said.

Despite the efforts of the Şen family and the Human Rights Association, there has been no trial.

After witnessing Helin’s death, Nazmiye began taking medication for depression and was hospitalised. She is still undergoing treatment for her mental health.

“It’ll be three years, and I still cannot sleep. I’ve been seeking psychological treatment, I take pills, and I cannot sleep. I still conjure up a mental picture of my daughter at that moment lying on the ground,” she said.

The lack of justice has also taken a heavy emotional toll on her.

“The pain is indescribable. Today, if my daughter died by a bullet, the killer would be captured in three days. If my daughter had been killed by terrorists, they would have still caught the murderer. But because my daughter was killed by a state official, there is no way to take action. The investigation has been ongoing for three years, and he still hasn’t stood trial.”

Nazmiye said her other children are also distraught. Her brother Kadir saw what happened and quit school. Even though Kadir has sought help from professionals, he has not been able to fully recover.

Helin’s father was fired from his job as a city bus driver because he persisted in following through with Helin’s legal case. Nazmiye said that despite ailments such as diabetes and high blood pressure, Nazmiye’s husband had been forced to work in a more physically demanding job; construction.

“We are the claimants, and my husband was fired because we were following up on the case. They are both killing our children and punishing us. Punish us as much as you want, but I won’t give up on this case even if I have to beg for food. They offered me a permanent job and money so we would give up on the suit. But I won’t give up,” Nazmiye said.

The pain felt by the Şen family is not limited to them. The fighting that broke out in Turkey’s southeast in 2015 was the resumption of nearly three decades of conflict between the state and the PKK. According to the International Crisis Group, since July 2015, 3,917 people have been killed, 452 of them civilians.

“In the east, the death of children and humans has become like killing ants. If there were justice and if an officer shot (someone), then you would punish them,” Nazmiye said. “A lot of our elderly, youth, children, and civilians have died. A lot. No one has been held accountable. What kind of justice is this? I’m asking as a mother. How can we trust the state?”