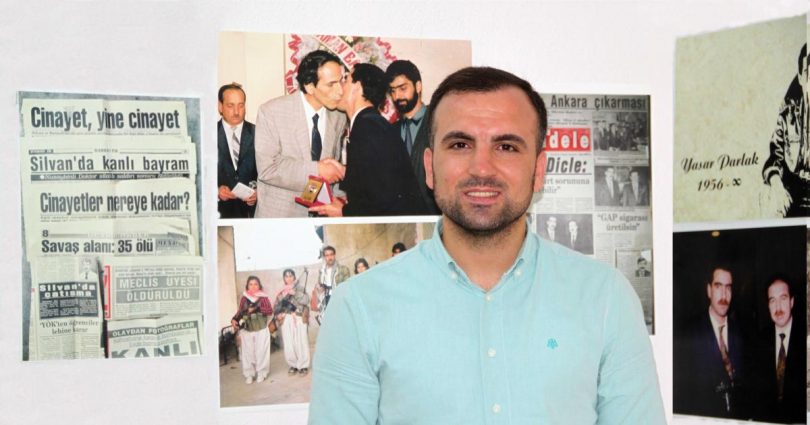 I want to share with you the story of a young, brave journalist whose age equals the number of court cases that have been brought against him. This is the story of Ferhat Parlak, a journalist from the town of Silvan in southeastern Turkey, who spent 14 months behind bars, waiting for justice. Ferhat’s story also exemplifies the difficulty of being a journalist in Turkey.

The Parlak family has been working in journalism in Silvan, in the mainly Kurdish southeast, since 1988. In the 1990s, along with the city of Batman, Silvan was a hub for the Kurdish Islamist Hizbullah movement. Ferhat’s father Yaşar Parlak published the Mücadele (Struggle) Newspaper. He focused especially on the crimes committed in Silvan by Hizbullah and the Gendarmarie Intelligence Organisation (JİTEM), which the Turkish government used in the fight against the Kurdish movement. He started receiving death threats.

“We were always on guard. When we were kids two Hizbullah members were killed in front of our house. Sometimes somebody would ring our bell, but when we went to check who it was, there was no one there. My father was always being followed, and he always felt his life was in danger. He was struggling against Hizbullah and JİTEM. They were imposing psychological pressure on my father,” Ferhat Parlak’s brother Serhat said.

Yaşar Parlak began to write a book on Hizbullah and JİTEM crimes in Silvan. His book, “Silvan: The City of Martyrs”, detailed nearly 400 unsolved murders, 45 attacks that resulted in injury, and 111 instances of torture. But in 2004, before he could finish the book, he was shot in the back of the head in a Silvan mosque.

His murder remains a mystery. The eldest son Ferhat, who was 20 at the time, followed in his father’s footsteps, became a journalist and finished the book. Ferhat was always getting into trouble with the authorities and having court cases brought against him. In a sense, he became the voice of Silvan. In 2014 the newspaper’s print ended, but Ferhat continued online. In August 2015, when street fighting broke out in the southeast, a court shut down the newspaper website, but Ferhat continued sharing news on Silvan via social media.

When the government began imposing 24-hour curfews in the region, Parlak’s reporting came to the attention of the authorities again, and police openly threatened him. His home and offices were searched and his computer, magazines, books, and documents related to his journalism, were confiscated.

When the central government began appointing administrators to govern Kurdish municipalities, Parlak began reporting on them. He developed a huge target on his back. Police even assaulted a young journalist visiting Silvan because they mistook him for Ferhat. Many cases were prepared against him and he was arrested 14 months ago, but only this week appeared in court.

I have read the indictment against Ferhat, as well as his defence. It accuses him of being a member of an armed terrorist organisation and calls for a sentence of 15 years in prison. Many of his journalistic activities are characterised as militant activity. The indictment uses old photographs his father took with Iraqi Kurdish Peshmerga fighters as evidence.

The book “Silvan: The City of Martyrs” was denounced as a terrorist publication. According to testimony from a secret witness, Parlak is accused of forcing a young person to join an armed group, but the youth in question is currently living a normal life in Silvan.

There are more such testimonies from secret witnesses, but for some reason these witnesses are not being called to the stand. In a letter he wrote from prison, Ferhat Parlak said the evidence against him included interviews he conducted and photographs he took in Qandil, the northern Iraqi base of the Kurdistan Workers’ Party (PKK), at a time when the Turkish government and the armed group were engaged in a peace process between 2013 and 2015.

“During the peace process, official news agencies as well as prominent news organisations, including Anadolu Agency, Doğan Agency, and Cumhuriyet, among others, sent nearly 100 personnel to Qandil … If going to Qandil is a crime, then Anadolu Agency and I have committed the same crime. Why is it that I am being taken to court but Anadolu Agency is not being prosecuted alongside me?” the letter asked.

In short, a young journalist criticises the government and Hizbullah, comes face to face with death, and even goes to jail, but since this journalist is Kurdish and working independently, no one comes to his aid, and he remained lonely and imprisoned. Ferhat’s story is also the story of being an independent, critical journalist in the Kurdish region of Turkey.

Ferhat Parlak has been the subject of 34 court cases, but has only been a journalist for 14 years. His hair has already started to go grey. He is 34-years-old, with two young children and as many court cases as years.

Ferhat Parlak was freed on bail during a hearing on July 8 after 14 months in prison. His next hearing will be in November.