Bekleviç set out on the Brotherhood March on April 16, marking the one-year anniversary since the constitutional referendum vote that resulted in enhanced presidential powers. In order to cement these powers, the Turkish President Recep Tayyip Erdoğan last month called for early presidential and parliamentary elections to take place on June 24th, nearly a year and a half before the elections were initially scheduled.

The aim of the Brotherhood March was to display the solidarity between Turks and Kurds at a time of ongoing armed conflict between the Turkish government and the Kurdish Workers’ Party (PKK). This march ended at the bottom of the Four-Legged Minaret in Diyarbakir’s Sur district, which became a site of destruction due to battles fought between the Turkish government and Kurdish militants.

In a recent interview, Bekleviç spoke with Ahval News about losing out on his recent presidential bid as an independent candidate, the importance of the Brotherhood March, and his proposal for a federal state.

I spoke with Bekleviç a couple times before left on the march, and his enthusiasm was infectious. He said to me, “While I am marching, remain silent if you wish. Make fun if you wish. But I know that I will not tell my children that ‘I awaited disaster in fear,” Bekleviç said. 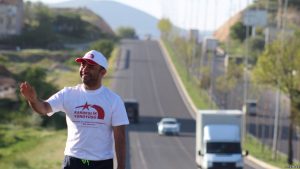 I met with Tuna Bekleviç after he had been on the road for 25 days in a camper parked at the entrance of Diyarbakir. We had our interview after enjoying breakfast. A lot of people dropped by during our interview, and I saw that the march meant something to them. It seemed as if Bekleviç already won over the hearts of some people.

Until recently, you were an independent presidential candidate for the upcoming elections on June 24, but three other candidates were chosen to run. What are your thoughts on this?

I’m disappointed in the opposition when it comes to the presidential candidacy. We started our preparations [for campaigning] early, last year in September. No one else was as prepared as we were. We event built a signature database and did some case studies. We got 114,000 people on the list. But Erdoğan only had one thing in mind, and that was to enter the election with the least number of candidates, [however] he couldn’t do it. Still, three independent candidates emerged and ruined his calculations on this. We could have been one of the independent candidates but weren’t.

Why did you decide to march from Ankara to Diyarbakir?

This has been my dream for 20 years. I’ve always wanted to do something in the [Kurdish] Region, but I was nervous about how society and the party would perceive it and what my words would lead to in the future. But at some point, it was necessary to overcome these anxieties and to be brave. There have been petitions, meetings, and panels, etc.., and there is almost nothing left unsaid on the Kurdish issue. Everyone has said everything, yet nothing has come out of it. Maybe it’ll be recorded in history as collective action, but ultimately this does not lessen the suffering of the Kurdish people, nor alleviate the persecution carried out by the state, and it does not relieve the tears of the people here. That’s why I started thinking that I should do something a bit different.

What I have is physical strength, energy, and two feet. It just felt like a good idea to get out and go on this march. I thought that the march would make me feel better and that perhaps more people would follow and that I would meet with and talk to people on the road and visit villages and homes.

Given the ongoing fighting between the PKK and the Turkish government, you have proposed that the Turkish state adopt a federal structure. However, this is quite controversial among Turkish society as it stokes fears of dividing the country into several parts. How would you explain your proposal?

Both societies and both languages [Turkish and Kurdish] have suffered a lot, and there’s very little empathy left. People don’t want want to understand each other, and prejudice is too prevalent. In this, the contribution of the government, which does not take its own citizens seriously and does not perceive its priorities, is great. Politics has surrendered too much to the state. I foresee that the state structure as the basis of these problems. There are very serious problems the how the state is constructed. Like cancer, it’s a difficult problem to fix.

It’s absolutely necessary to be able to discuss different proposals. Their first step is a federal structure. No other medicine can heal this state. Even if it’s difficult, maybe we can rebuild by talking about it. It needs to be discussed extensively. The talk of federation over Kurdish society creates a lot of tension in Turkish society. It needs to be discussed throughout the whole country. In this regard, the state should be bolder. But this could be done with a powerful administration. Good coalitions and alliances make strong leadership, not a single-party power.

The people in Anatolian villages and towns have been hit hard by presidential decrees – which have led to mass arrests and other abuses – issued since the coup attempt in July 2016 to topple the AKP as the country continues to be under a state of emergency. Do you think that the Anatolian people are ready to discuss a federal structure in Turkey?

I feel that Anatolia is ready for this. Turkey is ready for this debate now. People really do want peace. They’re not at all happy, they’re worn out. The Kurds themselves don’t want to go through even more persecution. And during this time, [the people of] Anatolia understand the Kurds a bit better. The drama and tyranny experienced by the victims of the presidential decrees pushed the nationalist and conservative segment to share in the suffering of the Kurds to some extent. They say that they’ve been going through the same thing since the state of emergency began two or three years ago. The state hits people so badly until they don’t know they have the right to live.

And with this, I think that Turks are at a point where they can discuss a federal structure. When it comes to the issue of language, we need more sympathetic, younger people. I think it would be better if we have people in politics who have a vision for Turkey’s future instead of politicians who are waiting for retirement.

Do you really believe that peace, democracy, equality, and brotherhood is part of Turkey’s future?

If there is renovation, transformation, and renewal to the structure of the state, then there would be real peace and coexistence in this country. But I think that the administrative structure is what is blocking peace. This applies not only to the Kurds but also to the Thracian community. If we were to have a referendum to determine the people’s and Turkey’s future, I’m certain that more people in the Thrace region [in northwestern Turkey] would vote for a federal structure than in the Kurdish region. This means that since the republic has been established, there has been a breakdown on this issue, and this breakdown must be resolved in a way that’s prudent and centered on the lands and the people. When you do not do this, you push people to defend and fight with weapons. But if you follow suit, then you may have the chance to resolve this nonviolently. For those of us who are not familiar with weapons and violence, the only defensible thing should be the debate of the federal structuring of Turkey.