“The day after, on March 22, 1992, I remember watching as groups of people walked towards the bridge on Çağ Çağ River. The group of people grew as one-by-one they sat on the bridge. It was a peaceful protest. I had just taken a shower. My sister and I could easily see the bridge from our window. We watched in horror as police armoured vehicles approached the bridge from both sides. It was a small bridge. There was no escape for the people on the bridge.

People were screaming. There was no way to go, no way to escape. We watched as the armoured vehicles ran over people like pieces of paper. We cried and screamed from our home. People tried to escape, but it was impossible. The special operations teams shot people who tried to escape or jump into the river. I watched as a young boy, who was trying to escape was shot in the back.

“Our life has never been the same since. We have never forgotten that day. I had just taken a shower. I will never forget the smell of that shampoo. Even today when I smell that shampoo in a market I shudder. It smells like a massacre.”

These are the words of one of my friends, Fehmile Danış, a lawyer in Diyarbakır who told me this story. Sixteen people were killed and many more wounded on that bridge. After the massacre, the bridge was renamed as “The Bridge of Martyrs”. Every year, on March 22, a memorial ceremony has been held on the bridge.

After 21 years, on March 22, 2013, a memorial statue was erected in Nusaybin to remember the people who lost their lives in the massacre. It was just one day after the peace process was officially declared between the Turkish state and the Kurdistan Workers Party (PKK). The ceremony was also covered by the Turkish media. There was hope in the air. A hope that not only Nusaybin but also all of Kurdistan would see good days and good Newroz celebrations in the future!

These hopes disappeared very quickly. After the peace process collapsed in August 2015, clashes began in Kurdish cities. This time though, the clashes were in city centres, a characteristic that was different from the previous past 30 years of conflict. In August 2015, the state declared curfews in Kurdish cities across southeastern Turkey. At the beginning, these curfews lasted for a couple of days. After a while, the curfews became regular and lasted months. Nearly 1.5 million people have been affected by the curfews. In some cities, the curfews continued for months and years. 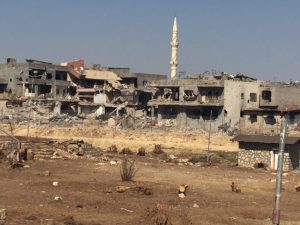 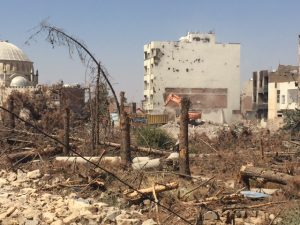 After 134 days of military curfew, on July 19, 2016, the curfew was lifted in Nusaybin. It was hard to recognise the city. The six main districts at the heart of the city were totally demolished. Half of the city does not exist anymore. It was hard to believe that in the same area, there were houses, schools and shops. The demolished area was separated from the rest of the city with a 3-metre high barbed wire fence.

The city’s Musa Anter Park, bordering the demolished area was also destroyed. Some 6,000 trees in the park were also burnt. I will never be able to forget this scene.

After the curfew was lifted, I went to Nusaybin. The destruction in those districts continued. Huge construction machines were continuously working in the area.

The people of Nusaybin watched this destruction from behind the barbed wire fence. I met some women who were crying while they watched the destruction. I asked if their houses were destroyed. One of them answered: “Yes, our houses were also destroyed, but we are not crying for our houses, we are waiting for our children. The dead bodies of our children are under the rubble”.

Some 45,000 people have become homeless in Nusaybin. Some of them moved to nearby districts or villages, and some lived in tents. With the Kurdish mayor Sara Kaya (who has now been in prison for more than 18 months), I visited some of the families who had lost children. In September 2016, a state administrator was appointed to replace the elected mayor. In place of the demolished districts, the state began constructing huge apartments. They planted new flowers and trees in the Musa Anter Park.

A few days ago, the monument commemorating the 16 people who were killed in 1992 was demolished on orders of the state administrator. This follows the destruction of other monuments erected to commemorate dead Kurdish politicians, writers, intellectuals and Kurdish children shot by security forces. The monument was replaced with a clock tower.

By demolishing our monuments, the state thinks we will forget the massacres and our loved ones. They have no idea. That clock tower will always show the hour of the massacre in 1992. The new trees and flowers planted in the Musa Anter Park will always smell like a massacre. A smell we are all too familiar with.