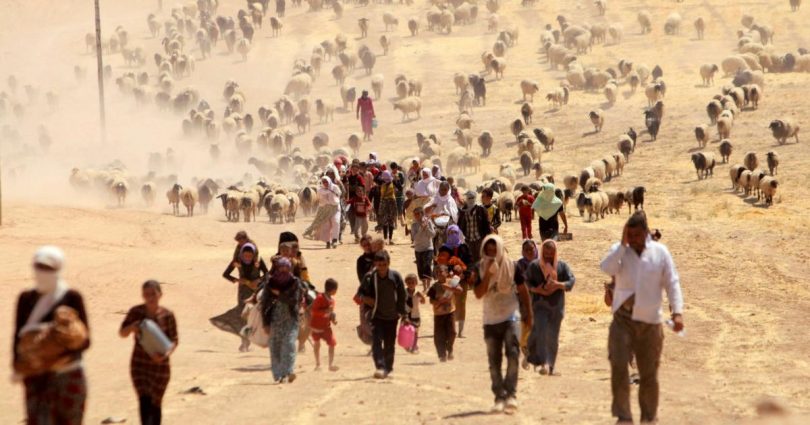 Five years ago today, the hundreds of thousands of Yazidis in Sinjar, northern Iraq, woke to a day of horror.

The Islamic State (ISIS) captured the town, forcing more than 300,000 Yazidis to flee their homes, killing thousands and forcing many more of their women and children into slavery.

Much of the savagery suffered by the Yazidis in the event they call the “73rd Decree” is widely known: massacres, slavery, all kinds of torture, rape, human trafficking and the destruction of a society.

But the other crimes committed by ISIS have not so far been the focus of sufficient attention. It is these lesser known war crimes that Amnesty International details in its December 2018 report, “Dead Lands: Islamic State’s Deliberate Destruction of Iraq’s Farmland”.

The report contains details of how ISIS burned orchards in the Yezidi town, pillaged their livestock and farm machinery and turned their farmlands into minefields.

Agriculture is one of the main sources of subsistence for the Yazidis. Sinjar lies on a plain south of the Shingal mountain, and the plain lacks water sources. To the south runs the Solak, little more than a stream, so the people of Sinjar must draw water from wells. In short, agriculture and sources of water are vital for the life of Yazidis and Sinjar.

ISIS knew this well, and targeted Sinjar’s agricultural areas to prevent the return of the Yazidis.

The Amnesty International report lists how the group poured debris, oil and other material into the wells and stole or damaged their water pumps, cables, generators and transformers. This is besides the destruction of orchards and of electricity cables and the laying of mines in Yezidis’ fields.

Hadi, a farmer in his 40s interviewed for the report, told Amnesty about the “pure destruction” he had witnessed when he returned to his fields south of Shingal mountain.

“I had a well – 220 metres deep – as well as a generator and an irrigation pipe system. They threw rubble in my well and filled it to the top. My trees were chopped down – I could see the marks from chopping with a chainsaw. The irrigation system – from the pump to the pipes – was stolen. They did this to send a message: that you have nothing left to return to, so if you survive don’t even think of coming back.”

Water is one of the greatest weapons in the Middle East. This is why ISIS immediately targeted and destroyed the wells in Sinjar.

This tactic was used throughout Syria, too, where Islamic State jihadists sought out and damaged water sources, wells and pipes wherever they could. They knew that the one who seizes control of water in the dry climate of the region takes control of life, and by destroying water sources they wipe it out.

In some cases like the attack on Fallujah Dam, ISIS has used water as a literal weapon against enemy combatants.

On some occasions ISIS would render water unusable in an area, polluting it to kill agriculture. On other occasions they flooded areas to kill crops. By controlling the flow of water, they gained dominance in the regions they attacked and legitimacy as their rulers. Thus in Iraq’s Mosul, when ISIS seized the water sources and dams and distributed water to the inhabitants, they were at first seen as liberators.

Today in Sinjar, agriculture has come almost to a standstill. This means the end of life in the area for many Yazidis. Amnesty’s report states that about half the population prior to ISIS’s occupation has returned. Agricultural conditions are of the utmost importance for the return of the other half.

Yet ISIS has left behind it large-scale and longlasting agricultural devastation. With no seeds, no water sources, no livestock, how can the Yazidis reclaim their lives?

Amnesty has called on the Iraqi government and international organisations to provide support and establish rural development programmes in the areas destroyed by ISIS, and to hold those responsible to account.

“In this respect, access to water resources is the missing link preventing farmers and former farmers from enjoying their right to gain a living by work and to be able to return to their homes and farms”, the report said.

“Iraq adopted an official reconstruction plan in 2018. The plan includes an assessment of the extent of damage to the agricultural sector and outlines the costs of recovery over the next five years. The government needs to fund and implement this plan and urgently repair critical irrigation and other rural infrastructure”, it said.

The report quotes the World Bank and other economic institutions and analysts as saying that oil-rich Iraq has the resources to fund much of its own reconstruction, but that work on reviving rural areas has barely begun.

None of the farmers and villagers quoted in Amnesty’s report had received assistance from the state. The international rights organisation is yet to receive a response to its questions on the issue from the responsible Iraqi ministries.

Without that support and the possibility of agricultural recovery it would bring, hundreds of thousands of Yazidis will be unable to return to their homes and way of life. Sinjar and other areas pillaged by ISIS will risk turning into dead lands.

ISIS committed the most horrendous crimes, killing and enslaving thousands in a genocidal campaign. If the land in Sinjar is allowed to die out, preventing the Yazidis from returning to their homes, this in a sense means that ISIS achieved the aims of its murderous crimes. This is why reviving Sinjar is a duty for the whole world.