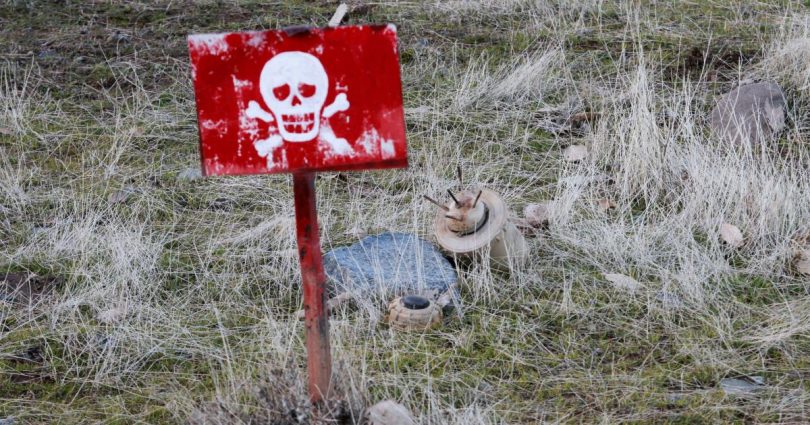 A few days ago, four-year-old Nupelda and 10-year-old Ayaz Güloğlu stepped on land mines while they were out grazing cattle outside the city of Dersim in southeastern Turkey.

Every month, a few children are wounded or killed by mines and armaments left over from the three-decade conflict between security forces and the Kurdistan Workers’ Party in the country’s southeast. Earlier this month, 13-year-old İsmet Kılıç was seriously injured when an object he found exploded in his hand.

For decades, land mines and explosive ammunition have been killing or wounding Kurdish children. The majority of explosions occur when children mistake the weapons for toys and pick them up.

Land mines are recognised across the world as the most insidious of all weapons, and have been banned by international law. Land mines do not ask for identity papers, they cannot differentiate between the enemy and a child looking for a toy. They do not distinguish between their victims.

Seasonal factors such as rainfall or wind can cause soil to shift naturally, also causing land mines to shift. As a result it is likely that a mine buried in one location will shift to another area through natural forces. It is difficult, dangerous and time-consuming to retrieve a mine once it has been buried.

Mines do not recognise peace, ceasefire or truce. Even if war ends and peace is declared, mines continue killing, remaining active for up to 100 years.

Today there are thought to be more than 100 million land mines planted in 64 countries around the world. In the early 1990s, the Mines Advisory Group began a campaign that won a Nobel Peace Prize and resulted in the 1999 adoption of the “Convention on the Prohibition of the Use, Stockpiling, Production and Transfer of Anti-Personnel Mines and on their Destruction”, commonly known as the Ottawa Treaty. The treaty requires signatory countries dispose of mines in storage within four years, and mines in the field within 10 years. One hundred and forty six countries signed the treaty. Turkey signed on in 2003, and ratified it in March 2004.

A 1999 report by Landmine Monitor said the Turkish government had planted 936,663 land mines between 1957 to 1998. Between 1989 and 1992 alone, it said the government planted 39,000 around police stations and security buildings in the east and southeast. In the 1990s, in villages that had been emptied to undermine Kurdish resistance, the government again planted mines to prevent people returning home.

The PKK, which has fought the Turkish government since the mid-1980s, has used this insidious weapon just as much as the state. In July 2006, the Geneva Call announced that the PKK had unilaterally signed an agreement that banned the use of anti-personnel mines, but did not ban the use of remote-controlled explosives—the media in Turkey often conflates the two.

The Turkish government protested that it was not previously informed of this agreement and that it was done against Turkey’s will, and therefore opposed it as unacceptable. Data from the Geneva Call indicates that since signing the agreement, the PKK has not used anti-personnel mines, but has used remote-controlled explosives. Since these explosives are considered to be an attack that targets a specific subject, they are distinct from land mines from a legal perspective.

Turkey today has around 1 million land mines. There are an additional 3 million land mines in storage, which are supposed to be disposed of. Among signatories of the Ottawa Treaty, Turkey is the country with the most anti-personnel mines.

Turkey has some 2,000 km of land borders, many areas of which have been planted with land mines. The biggest mined area is along the 600-km border with Syria. In 1975 and in 1996, parliament set up a commission to investigate the removal of mines along this border. Both times, the commissions recommended the land should be cleared of mines. A “Mine Law” was passed in 2009, which addressed policies for clearing mines on the Syrian border, but addressed neither the Iran nor the Iraq borders, nor mines farther inland. A company won a contract to clear the Syrian border of mines in 2000, but little progress has been made.

The biggest danger to civilians from land mines in Turkey is not at the borders, but within the country. Most of the injuries and deaths from mines occur within the borders.

When urban warfare broke out in 2015 between the Turkish army and Kurdish fighters, the weapons left over from this fighting were not disposed of properly and began to pose residual threats to civilians, especially children. Turkey has not prioritised clearing mines or weapons. The Ottawa Treaty required all mines to be cleared by 2014. Turkey failed to meet this deadline and asked for an extension, and now must clear mines within its borders by 2022. Not only has the government failed to take concrete steps to meet this deadline, it has also displayed a disregard for human life in its handling of the issue. At one point, the National Defence Agency even lost the maps that marked where the government had planted landmines, but later announced the maps had been found. The state sees the matter not as a human rights issue, but rather as a security issue.

We civil society organisations, activists, and rights defenders have a lot of work ahead of us. We must advocate for the removal of these mines, and put pressure on both the government of Turkey and international organisations. Otherwise, Nupeldas (which means newly opened leaf in Kurdish) will wilt before they can bloom, and children will continue to be victims of horrific violence.