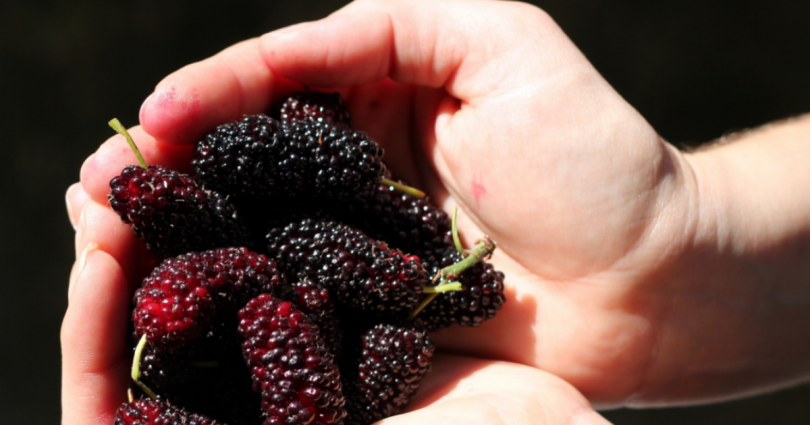 When mulberries ripen and fall from the trees in southeast Turkey, we often walk right over them, squashing the berries as we go. Especially if you are living in Mesopotamia, which is some of the world’s most famously fertile ground, mulberries are everywhere — on the ground, in the streets, and often making stains on our clothes.

As soon as the weather warms, mulberry stains begin to appear, and they are almost impossible to wash out. When I was growing up in the city of Diyarbakır, every new homeowner would plant a mulberry tree in their garden. Mulberries were a part of life. Now, these beautiful trees are not planted as often, for fear of attracting flies.

But mulberries were also a part of other lives, not just ours.

The day before the anniversary of Sayfo, or the Syriac genocide of 1914-1924, I received a picture of a handful of mulberries and a short message from a Syriac Christian named Ferit Sağ who has been living in exile for 32 years.

“We have been driven from the land that we grew up on, eating the grapes, figs, and mulberries of Mesopotamia, to cold countries of the north,” he said. “This may seem mundane and unimportant to many of you, but have you ever longed for a handful of mulberries?”

He was referring to those same berries that today we step on in the streets, to those trees we now cut down for fear of attracting flies. How commonplace they seem to so many of us. But for those who are forced to leave and cannot return, how meaningful a handful of mulberries becomes.

Every time I go abroad, I hear stories of people who grew up eating Mesopotamia’s grapes, figs, and mulberries, who are now struggling to hold on in countries that do not see sunlight. My suitcase is always full. Some ask me to bring figs, some ask for dried chilli peppers, some for sausages with walnuts, some for roasted melon seeds, and some for Diyarbakır bread. What is so commonplace for us here represents pain, longing, and nostalgia for those who have left.

For folks like Syriacs, who have been the targets of genocide, the memories are very painful.

More than 100 years ago, when the Ottoman government was driving Armenians out of Anatolia and toward Syria during World War One, Syriacs also became victims of these marches. Mesopotamia’s ancient peoples were forced on the road, without being told where they were going. This march would continue until none of the travellers were left.

Some of the men who survived would be massacred with bullets, while the women would be sold. Children would be forced to convert, and given to orphanages to become Muslim Turks. In the events of 1915, which Syriacs have called Sayfo, hundreds of thousands of Syriacs were massacred. Hundreds of Syriac towns were burned and destroyed. The Syriacs’ homeland was left desolate. The Syriac population in Turkey, which used to number 700,000, is now around only 20,000.

It is impossible to find a single Syriac in many of the towns in which Syriacs used to live in. The mentality of infidel possessions being fair game continues today. The handful of Syriacs left behind face significant challenges, and are forced to pay the price of staying behind.

“They hit us and beat us and forced us out of our village,” one Syriac wrote on social media last week. “It all got left behind,” said another. “The tea in our tea glasses … Our childhood on the streets … Our loved ones far away … Our smiles in photographs.” “For me, it is figs,” said a third. “I divide countries in two: those that have figs, and those that do not.”

As I read these comments, I thought of Tahir Elçi, a Kurdish lawyer and friend to all marginalised peoples before he was assassinated in 2015. I also thought of a woman named Naze, whom I met with her family in May 2014. They were Chaldeans, another Christian group with a long history in Mesopotamia.

When the police raided her village of Görümlü in June 1993, they arrested Naze’s father-in-law Hamdo Şimşek and his wife Hükmet, among a group of six people that included the village imam. The soldiers hung a cross from Naze’s home around the neck of the imam, dragged these six people into the village square, and took them away. No one ever saw them again.

Naze was forced to go to Belgium as a refugee, along with many children. The deceased Tahir Elçi worked on their cases for years, pro bono. On that day in 2014, Tahir was very busy, so I took Naze and her family to breakfast and we waited for him there. I met Naze again in Brussels a few days after Tahir died in November of the following year. This was the last time I saw her.

She was very upset that our dear brother Tahir had been killed. “I wish I had not returned, I wish I had never stepped foot on that land. But all that I want from this country is an apology and a handful of bones,” she said.

This country sees a handful of bones as too much to ask, just as it has a handful of soil for the deceased, a plateful of food, a sip of water, a fig, a bunch of grapes, a handful of mulberries. We are in a country of endless exiles. This country has created refugees for hundreds of years, leaving countless people longing for the lives and traditions left behind.

Have you ever longed for a handful of mulberries?