The main difference between the present and Turkey’s so-called dirty war in its mainly Kurdish southeast in the 1990s, said the head of the Human Rights Association (IHD) in Turkey’s biggest Kurdish city, is that “there appears to be no rules or principles today … there is no rule or law.”

Thousands were killed as the conflict between the Kurdistan Workers Party (PKK) and the state intensified in the 1990s, millions lost their homes as security services torched villages in a scorched earth policy and an unknown number disappeared or were assassinated by pro-government hitmen.

But the conflict began to ease in the early years of the century following the capture of PKK leader Abdullah Öcalan in 1999. But after a two-and-a-half year ceasefire broke down in 2015, fighting has flared up once again and the government has carried out a wide-ranging crackdown on all forms of dissent under a state of emergency imposed after the failed July 2016 coup attempt.

“We suffered many rights violations, subjugation, oppression, during the regional conflicts in the 90’s, the same as today,” said Raci Bilici, the director of the IHD’s Diyarbakir office. “But, the main difference between now and then, is that there appear to be no rules or principles today. Everything is arbitrary and has become worse this year,” he told Ahval in an interview.

“Yes, we had human rights violations in the 90s, too. But we could talk to certain individuals, either the ruling political party, or the courts, or the military leaders, or regional government officials, but there was someone who would listen. Now, there is nothing like that.

“They won’t give us appointments. Sometimes, we will see them at a meeting, or another venue, but everyone says the same thing. There is no difference between them. They all speak with the same voice, the same language, and the same response. This is a serious concern. People’s rights were violated in the 90s, they were killed. They are being killed today. But, then, in the 90s, there wasn’t a single, unified, voice or mandate, as there is today.

“Another difference is that the justice system or judiciary has become completely arbitrary. With no indictment, they can hold a person for more than a year. The powers of law enforcement agencies and groups have increased unbelievably. They can’t be questioned, because a law was passed … ‘No matter what you do, you will not be held accountable, will not be tried’, giving law enforcement unprecedented power. This is different from the 90s. Then, if someone had done something wrong, or engaged in torture, they could be identified. Then, they could be questioned or prosecuted. Now, one can’t do that. Plus, they have instituted a statute of limitations. If these people haven’t been apprehended in 20 years, they can never be tried or questioned.

“Unfortunately, the 2017 report shows this: Human rights violations are increasing, and there is a greater restriction of rights and subjugation of people. Defendants are under time restrictions, curfew or house arrest restrictions, live under intimidation and threats, many of whom are afraid for their lives. In the 90s, over 3,500 villages were destroyed, over 4 million forced to leave their homes, countless people died. But, people could still come to our offices, still work with us to demand their rights, we could write up their concerns, keep records. But, today, due to the subjugation and repression, intimidation from security forces, people are afraid to visit us, or let us know their problems. 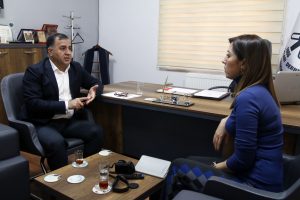 “If you look at the 2017 report, we have between 18,000 to 19,000 or more human rights violations reports. Thousands have had their homes invaded at the crack of dawn, homes are destroyed during searches, and people are taken into custody. Sometimes, people are not heard from for days. We only find out if the news leaks to the press or from a family member. But, many don’t come to us out of fear, so nothing gets done. The people say, ‘even if we report it, nothing changes’.

“Even if there is no one to report the violations, we have to keep records of these events, these violations must be documented. We may not be able to resolve the issue right now, maybe not stop the torture, nor fight against the erosion of freedom of speech, or press, maybe not prevent these violations, but we have to document them. The people tell us that when they report such violations to us, it becomes worse for them. Incidences of torture are also increasing, and again, not all reported due to fear and intimidation.

“There are two things which stand out during this situation: One, a year after the abortive coup of 2016, after the state of emergency decrees, guilt and punishment are longer personal. In such a case, even if one is innocent, they are afraid to speak up, because their family, their spouses, siblings, children, friends are affected and punished, along with the person in question, businesses are closed down, their property and wealth confiscated, they lose their jobs.

“Second, guilt and punishment have become disproportionate. For example, you may be fighting for freedom of speech, but your crime can be put in same category as being part of a terrorist group. Speak out against a war, now one is accused of aiding and abetting the enemy.

“The prisons are just as concerning. In the 90s, we could visit prisoners. Now, we have no access to prisoners, those who may have been in solitary, or maybe sick, or depressed … It was somewhat different in the 90s. We could see people through formal channels. Now, for example, we know there are 1,025 sick prisoners, who are gravely ill, among which 357 could die any day. While hospitals, after reviewing their files state that these prisoners should not stay in prison one day longer, the courts, contrary to the doctors’ demands, issue indictments to continue to keep the prisoners confined.

“While we haven’t been closed down as many other non-profit organisations or human rights groups has, it has become very difficult to work at the IHD. Our work is being criminalised, even though we have always been neutral and non-partisan. We have always sided with those who have been subjugated, unjustly imprisoned, whose rights have been eroded. This makes the ruling party incredibly uncomfortable, angry. We revealed the mass graves in this country, revealed the people who were detained and never released, those who have been suppressed or subjugated, the torture that has been inflicted on people. The ruling party could not deny any of our findings, except to once say, ‘no torture took place in that house.’

“It really is difficult to fight for human rights, it is even more difficult in this region. But we have to continue to fight. You can see what happened in the past, what we have suffered, and can imagine what we will suffer in the future. We must continue to fight, to have a better future. At least, for the sake of our children.”